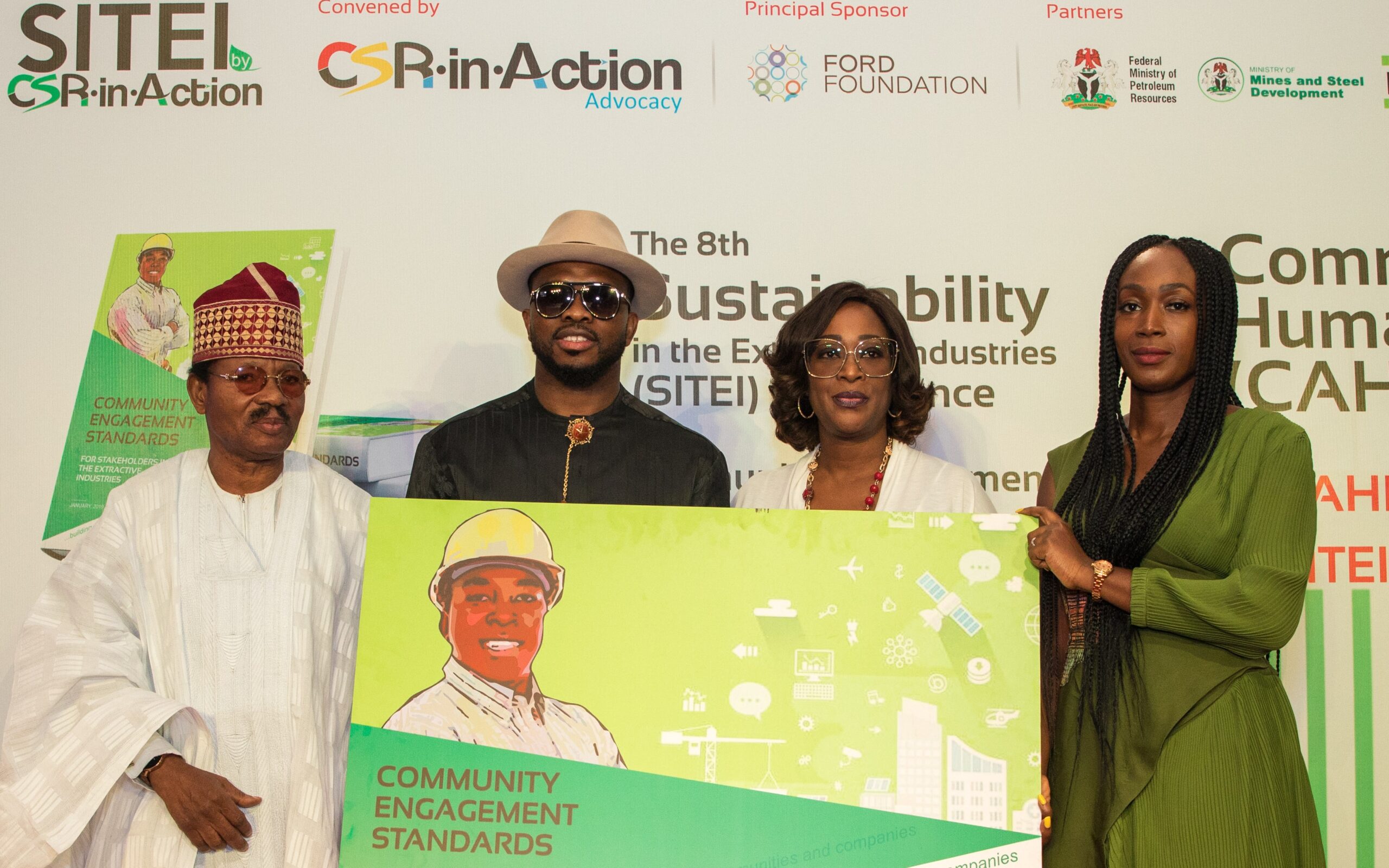 Stakeholders in Nigeria’s extractive industries arrived at a resolution on the need for extensive community engagement to resolve the interminable issues facing the sectors. Consisting of representatives from the entire value-chain, the 8th Sustainability in the Extractive (SITEI) Conference, organised by CSR-in-Action, offered a germane platform for stakeholders to articulate their perspectives on the operations of the industries and subsequently, agree on a blueprint for sustainable development; which pivoted on the adoption of the innovative Community Engagement Standards (CES).

Africa’s largest oil-producing and mineral-rich state, Nigeria, has a vast history of conflict in its extractive industries resulting from a multitude of issues, but most notably antagonism between host communities and companies. The 8th SITEI Conference, themed ‘’Community Engagement:  A Panacea for Peace in Extractive Operations,’’ assembled relevant stakeholders to deliberate on the myriad of issues challenging the sector, thereby, precluding the country from harnessing the potential inherent in the sectors. The unanimous decision reached at the conference was that deeper consideration needs to be paid to the subject for the long-term growth of the country.

Additionally, key stakeholders such as the Governor of Lagos State, Babajide Sanwo-Olu, through the Commissioner for Energy and Mineral Resources, Olalere Odusote,  advocated for the adoption of Nigeria’s first extractive industries engagement framework, the Community Engagement Standards (CES) developed by CSR-in-Action and funded by the Facility for Oil Sector Transformation and Reform (FOSTER II). According to Hon. Odusote, “We encourage the private sector to adopt the community engagement standards as it provides a base for engagement for everyone and it makes for an absence of confusion.”

He continued: “It is incontrovertible that the exploitation of high-value natural resources has always been cited as a key factor in sparking violent conflicts across the world. By so doing, host communities should be involved in community projects from inception and it will be in our best interest for our extractive industries to be catalysts for economic growth and development. Hence, the CES is a standardised tool for engaging communities in order to prevent conflict among stakeholders.’’

Similarly, the Convener of the Conference and Chief Executive of Nigeria’s foremost business sustainability outfit, Bekeme Masade-Olowola, stressed in her address the copious benefits in the adoption of the 44-indicator framework, which was developed following a year of painstaking research and consultation with stakeholders across the value chain. Masade-Olowola also dispelled certain misconceptions surrounding the document, stating that the framework was not developed with the intention to displace existing operational guidelines, rather, it harmonises efforts in a concise and easily consumable format.

Masade-Olowola stated: ‘’ Marginalisation is a major cause of oil theft. Therefore, host community members need to be satisfactorily compensated, so they can take charge of securing the communities/pipelines with the knowledge that any insecurity might adversely affect them. Sensitisation and employment of youth within the communities will help take their focus away from the immediate gains and understand the effects of their actions on the land.

With the adoption of the CES, businesses will enjoy higher profitability through theft and vandalisation reduction and focused CSR interventions to most pressing needs of host community, while serving as a point of reference for communities in engaging other stakeholders and foster sustainable development of the communities. In relation to the government, the CES will provide cohesion in government accountability and enhance equitable development of host communities.’’

In his welcome address, Board Chair of CSR-in-Action Advocacy and Former Vice-Chancellor of Obafemi Awolowo University, Prof. Wale Omole, harped on the need for a rejigged status quo with special emphasis on community inclusion. He asserted: ‘’There is an outright or indirect exclusion of communities perceived to be less important in critical development dialogues. Consequently, the CES aims to address defects in the social structure of the propensity for resource-induced insecurity and conflicts, and to enhance stakeholder participation in decision-making.’’

The ensuing panel discussions, which featured representatives from the value creation chain, including high profile celebrities and Niger Delta indigenes, such as Chief Joseph Yobo, Omawumi Megbele, Harrison ‘’Harrysong’’ Okiri, and Comrade Celestine Akpobari, laid bare the perspectives of the players in the sector and proffered solutions to the challenges confronting the sector, with inclusion being a major theme.

Commenting on the inexhaustible need for engagement between stakeholders in the extractive sectors, Programme Officer, Ford Foundation, Eva Kouka maintained: ‘’Persistent and continued engagement is imperative for the entire duration of operations in the sectors. Hence, it is critical to have a standard that evaluates the process with roles clearly spelt out to all stakeholders.’’

In the same vein, the Head, Legal Resources, Environmental Rights Action, Barr. Chima Williams, emphasised the need to engender a symbiotic relationship between host communities and corporate operators. According to Williams: ‘’We can create more jobs when companies know that their host communities are committed to protecting their assets and facilities in their environment. The CES looked at ownership from the perspective of inclusiveness because companies cannot leave out the host communities from the business.’’

Upon the conclusion of deliberations that constituted the fulcrum of the conference, the event transitioned into the inaugural Community Engagement and Human Rights Awards (CAHR Awards) with businesses and individuals receiving plaudits for their overall contributions to safeguarding human rights and promoting reciprocal community engagements in the extractive industries. Birthed by CSR-in-Action in conjunction with Growing Business Foundation, with support from Global Rights, the CAHR Awards recognised exceptional individuals and companies in six categories. A seventh category, the Ken Saro-Wiwa Award for Environmental Management, was not given to any company due to the lack of nominees in that category. Winners emerged following an online voting system and a rigorous screening exercise.

CSR-in-Action publishes the Corporate Sustainable Investor Report with the 3C-Index – the only sustainability bespoke analysis of business’ sustainability practices. Furthermore, CSR-in-Action is the convener of the SITEI Conference – an annual conference that offers a platform to discuss and provide suggestions to better implement government policies in the mining and oil industries, which is attended by leaders in the industries, academia, civil society, community and business. Our third most prolific approach to driving ethics, is through our project The Good Citizen, which aims at driving value system reorientation amongst individuals in the citizenry through solid partnerships, which now has the number one leading show on InspirationFM, The Good Citizen Radio Show.